In this next installment of my interview with AEG I discuss my creative process and a bit about the evolution of the Assassin character.  Check it out Here

Or you can read it right here.
"Mike, do you have specific processes to your work? What’s something you figured out that’s kind of unconventional?
Specific process….  Whenever possible I try to stick to the tried and true method of developing an illustration laid out by the masters. That includes rough sketches, studies, finished drawing, color rough, and then the final illustration.

Let’s start with the image of the pig farmer. The development for this character went about as smoothly as you can get. Both the art director [ed.--AEG's own Todd Rowland] and I had a clear vision for this character. The only change required from sketch to final was that he needed to look a bit happier. 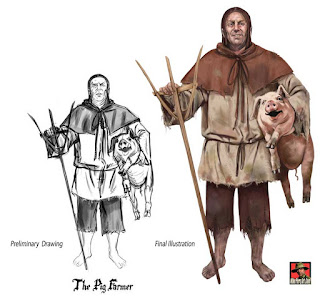 However, the Assassin was another story. Initially, the brief called for this character to be more of your back alley thug type. I would describe him as a “greasy knife in the back for a copper” kind of guy. The initial sketch pretty much nailed the concept but the team wanted to see options for a change in his pose.
At this point, there was some thought that this character could look a bit more “current,” and this is when we brought in the robes and talked about making him look younger.
We went through about five sketches and eventually settled on the posture from #4 and the costume from #5. 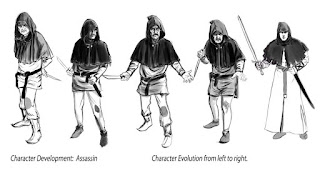 My process for painting is pretty straightforward. I start off with an under drawing and then paint over top of it like I would with traditional media. Then I start laying in the basic colors which is sometimes called “ flatting” to help establish my color scheme and basic value structure.
Once I’m happy with that, I move into modelling ( sometimes called rendering) the forms to establish the shapes and details. In this instance, you can see how the painting evolved along with the character. Initially I painted his legs thinking that he would be wearing hose as well as he had an older face. As the design changed, I had to paint over the legs and add in the robe and new face. Thankfully Photoshop allows me the flexibility to do this on the fly.
If I was still working in traditional media like oils, these types of changes would be doable but would have taken a lot longer. Once the rendering stage is complete, I clean up the silhouette, add a few adjustment layers to tweak the image, flatten it  and send it off to the client. 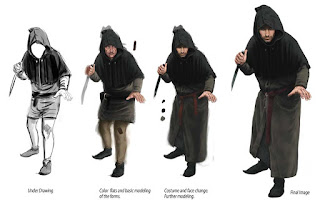 For more information on my work and for process animations and demos, please stop by either my website www. mikeperryart.com or my blog http://mperryart.blogspot.ca.
If you have any questions or would like to say hi, I would love to hear from you. You can best get a hold of me via email at mike@mikeperryart.com.
Cheers!"
For some reason, the process images that I submitted for this article were not posted on the AEG site but I directly refer to them which must be confusing to readers. Anyways, for clarity sake, here are the images that I was referring to.
As always, thanks for stopping by.